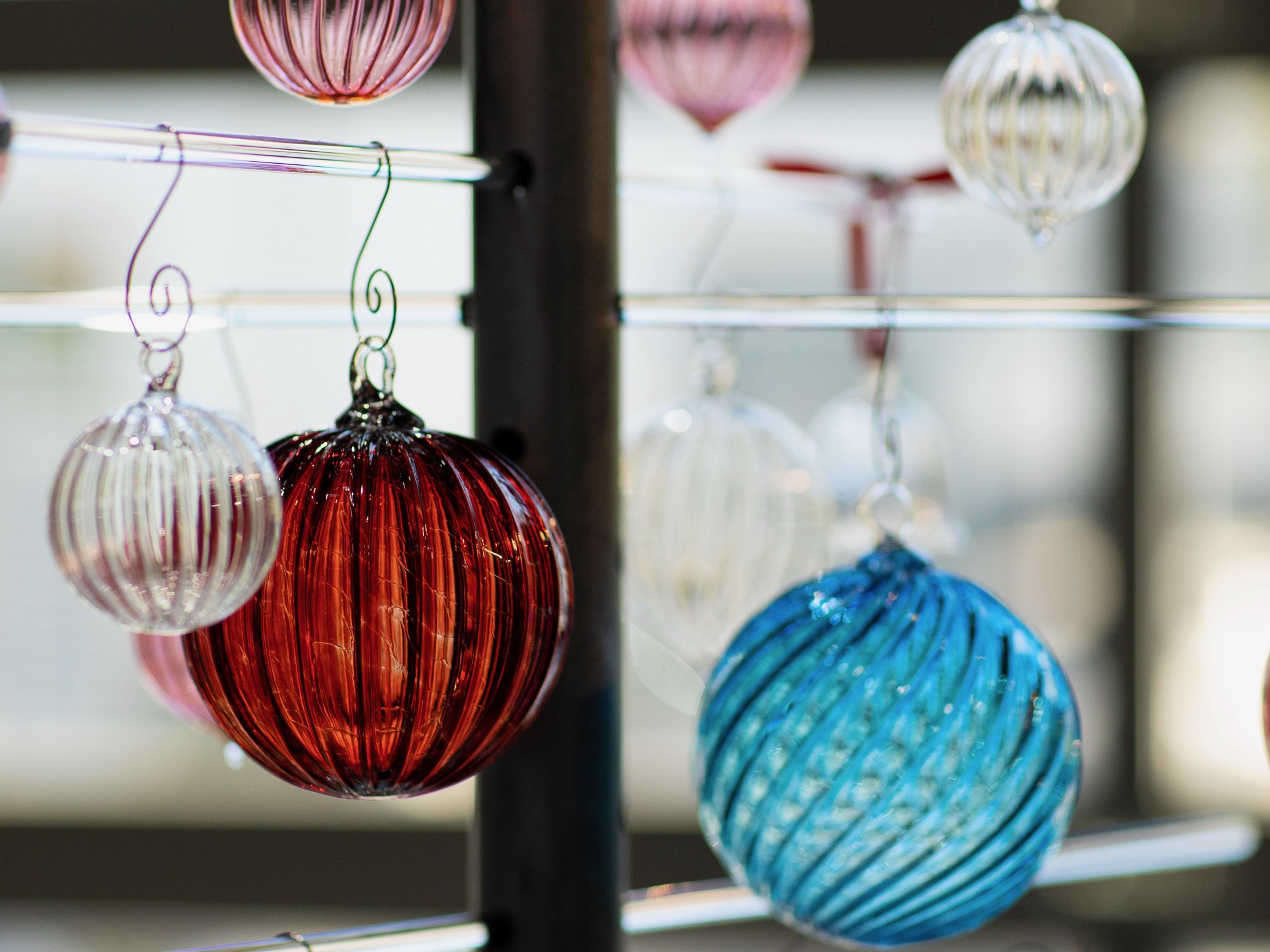 Entire worlds open up in the glassblowing studio and gallery of artist Michael Dickinson at The Barlow in Sebastopol.

Inside the 740 square meter space, guests enter a glass wonderland: delicate Christmas ornaments, stunning champagne flutes, jewel-toned wine glasses – even hand-blown glass marbles that envelop a whirlpool of mesmerizing colors as if something were from the farthest corner of the galaxy.

Dickinson’s studio and gallery, Dickinson Glass, is not to be missed over the holiday season, when the artist not only showcases his own unique creations, but also curates exhibitions of other glass art and ornaments for the season. And when Dickinson isn’t creating or exhibiting art, he brings his passion for glass to life by teaching.

His studio offers regular glassblowing and art glass courses, and he rents out workshops to other up-and-coming artists. “I see this as the ultimate place to share a passion for glasswork,” explains Dickinson. “The ability to create, work with my hands and the meditative aspect are all reasons why I love what I do.”

Dickinson grew up in San Mateo where his parents owned a commercial glass shop. As a child, he watched his parents make custom shower doors, stained glass windows, and other accents. Most of the work his parents created was flat, but Dickinson was fascinated by the challenges and design possibilities of three-dimensional work.

In his late teens he took a glassblowing class at Berkeley and quickly became addicted to the material’s creative prospects. He rented space at a local studio and learned as much as he could from other artists. Eventually, the artist developed his own signature patterns for his glassware, a series of delicate, undulating patterns based on mathematical graphs that convey a sense of movement and warmth.

“It was always so cool to me that you could melt glass and change its shape,” says Dickinson. “I was lucky enough to be able to build a career on that.”

Dickinson and his wife, Nicolette, first fell in love with Sonoma while visiting friends in the area. They found space at The Barlow in 2021, opening first the glass art gallery and later Dickinson’s public studio and teaching spaces. The pair have made the growing business a family affair: Nicolette, a former kindergarten teacher, now helps run the gallery and the couple often bring their daughter Luciana, now almost a year old, to work during the day.

Visitors often catch Dickinson in the middle of production. He manipulates the hot, molten glass with special propane-oxygen torches that emit flames at more than 4,500 degrees Fahrenheit.

His raw materials include a series of brightly colored storage tubes and rods made from borosilicate glass, which is harder and stronger than ordinary glass.

According to Dickinson, his favorite thing to do is create drinking glasses of all shapes and sizes, from brandy snifters to champagne flutes. The one-of-a-kind jars have developed a strong following among design-savvy Californians – Hollywood producer Jerry Bruckheimer recently purchased a set of 80 custom-made glasses for his home. According to Dickinson, making drinking glasses is a process that requires his full concentration. Giving each glass a uniform height is a challenge as the stem, base and vessel of each finished glass are made separately and then fused together with a burner. “If you’re not focused, it messes up and you have to start over,” says Dickinson. “I come here to make glasses and I’m completely isolated from everything else when I work.”

The glasses are spectacular, but Dickinson’s galaxy-like marbles are a creation in themselves. He creates the marbles, which look almost like black holes, by heating pieces of gold and silver coins and trapping the smoke fumes they release when heated in multiple layers of glass. Each individual piece can take anywhere from two to eight hours to make, depending on the size.

While part of the space is an exhibition space for Dickinson’s own work and occasionally the work of other glass artists he admires, his studio occupies more than half of the space.

The studio and gallery are separated by a glass wall that his father created in his parents’ glass factory in San Mateo. The studio also has workstations that Dickinson uses for beginner glass art classes.

In the new year, Dickinson hopes to expand his lesson plan and continue to rent out bench space to aspiring artists and others who have taken his glassblowing classes and want to expand their skills – just as he once did. He’s also hoping to branch out into lighting, specifically large-scale statement chandeliers and other artworks.

He also wants to continue working on smaller pieces of glass art, including the ones he makes each year to decorate his family’s Thanksgiving table.

Dickinson has a tradition of creating a one-of-a-kind wine glass for every family member and friend gathering for the holiday, a piece that each guest can take home at the end of the meal. “What I love about glass is that there really is no limit to the design possibilities,” he says.

Dickinson Glass is partnering with 2BGlass in Sacramento to host The Ornament Extravaganza on December 3rd and 4th, which will feature over 2,000 handcrafted Christmas ornaments for sale by 10 artisan glassblowers. The event will take place in The Barlow’s function room, just a short walk from the main gallery.

For those who want to try their hand at glass making on this holiday, Michael Dickinson is planning special courses in ornament making. During the two-hour class, guests experiment with making glass icicles and candy canes to take home. A more in-depth four-hour course also explores how to change the dimension of the glass by blowing a glass bubble and adding color. For class dates, prices and registration please visit the website.

Dickinson Glass at The Barlow, 6770 McKinley St., Sebastopol. Open Thurs. to Sun., 12 p.m. to 5 p.m. and by appointment. dickinsonglass.com

Glass artist Michael Dickinson and his wife Nicolette love to bring their young daughter along when exploring the scene in The Barlow market district. Here are some of their go-to places:

Dickinson and his wife love the rustic Mexican cuisine at this walk-in eatery near the Community Market. Dickinson, who is primarily vegetarian, calls the veggie burritos here “absolutely phenomenal.” 6760 McKinley St., Sebastopol. 707-329-6538, barriosebastopol.com

Stunningly creative cocktails and mocktails for a date night and the most beautiful indoor hanging garden around. 6780 Depot St., Sevastopol. 707-861-9603, fernbarn.com

On Dickinson’s first visit to The Barlow in 2019, he and his wife attended a dog birthday party at the local brewery – and eventually fell in love with the scene. They began looking for rental space nearby, and their gallery opened the following year. 120 Morris St., Sevastopol. 707-827-3893, crookedgoatbrewing.com