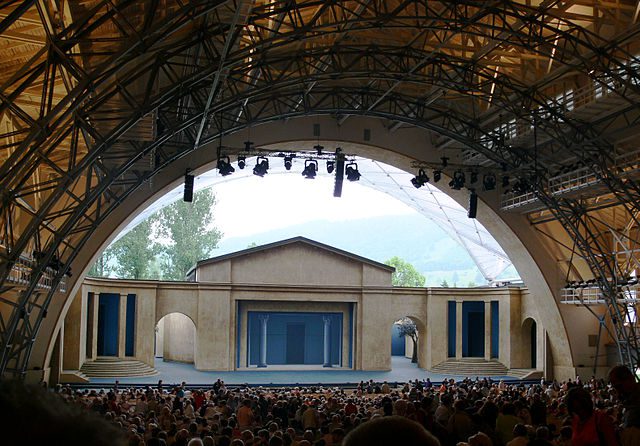 The Oberammergau Passion Plays in southern Germany were first performed in 1633 after the villagers made a promise to God: if the villagers did not die of the plague that ravaged the region, they would perform the passion of Jesus Christ every ten years. For 200 years, the Passion Play was performed in the village cemetery, and due to the growing number of spectators, an open-air theater was built on the site of today’s theater. Today’s theater is a modern facility that is almost entirely enclosed – there is no wall behind the stage.

The Passion Play lasts about five hours in total, with a three-hour interlude where dinner is served. It is divided into twelve acts, with a musical performance between the acts, reflecting the upcoming act with a freeze-frame depiction of Old Testament scenes. Everyone involved in the production is from Oberammergau or has lived in the village for at least twenty years. Despite the large scale of the performance, it’s still a small town production. Two of the young ladies who served us dinner in the interlude were in the chorus of the play.

These are the main points that struck me about this beautiful and poignant work:

The big crowd on stage

The sheer amount of people on stage is breathtaking. The Passion Play begins with Jesus’ triumphal entry into Jerusalem, where at least 250 people of all ages salute him with palms. Jesus rides onto the stage on a real donkey. Likewise, when Jesus was introduced to Pilate, the crowd was a real mob. The crowd stirs and shouts, reacting strongly to the words of Pilate and the members of the Sanhedrin. I found the scene before Pilate to be the most effective of the whole Passion Play.

Most of the text of the current Passion Play was written by Father Joseph Daisenberger (1799-1883), who was the village pastor. The text uses a lot of creativity in developing the dialogue between the biblical characters, especially in the first half of the play. The most notable creative touch concerns Judas. In the Passion Play, Judas and various apostles are dissatisfied because Jesus will not bring about David’s earthly kingdom. Caiaphas betrays Judas and asks him to bring Jesus to him so they can talk. When Jesus is arrested and taken to Caiaphas, Judas, realizing the high priest’s true intentions, protests. Since Judas insists that Jesus be released, Caiaphas offers him thirty silver coins to keep him quiet. Judas realizes his mistake, throws the coins on the ground and hangs himself. In summary, feel sorry for Judas, he too becomes a victim of the high priest.

Throughout the Passion Play, it is clear that the members of the Sanhedrin did not all agree about Jesus’ ministry. There are disputes between the different priests. At the same time, the play shows a lack of unity of thought among the apostles. This fact offers a very human and informed reflection on how the interactions within these two groups of men might have been.

Also noteworthy was the moment when the thieves and Jesus are brought down from the cross. Their bodies are dead weight, and it is impressive to see that the man portraying Jesus seems to stop breathing for a long time. It’s hard to realize that they are amateurs and not professional actors!

Mary Magdalene and the Resurrection

Just as Mary Magdalene played a central role in Jesus’ resurrection account, the passion play puts a beautiful announcement of the resurrection on her lips. When she realizes what has happened, she exclaims: “I will announce his resurrection to my brethren, I will praise him in the midst of his church! Wake up Zion! Put on your best clothes, Jerusalem, holy city! People of Mount Zion, you inhabitants of Jerusalem, wake up! Your eyes will see the king in his beauty! Your ears will hear him! He was condemned, shunned by men, a man in pain. But God delivered him from the pangs of death and raised him to life. I know that my saviour is alive! He is with us every day to the end of the world! Therefore my heart rejoices, and my tongue is lifted up! Ah, if only I could shout it through all the world, making mountains and crags and heaven and earth resound with it: Hallelujah! He is risen!

The Oberammergau Passion Play is worth a visit. The next opportunity to see it will be in 2030 when it returns to its proper cycle (it was carried over from 2020 to this year due to the coronavirus). Whilst there I heard that it will be performed again in 2034 to commemorate its 400th birthdayth Anniversary. The Passion Play is a beautiful expression of faith and art that not only inspires visitors but is sure to awaken the faith of the villagers.